POLICE ON MANHUNT FOR ONE YEAR-OLD BABY AT TAKORADI MARKET

Nana Akosua is calling on the general public to help find her little boy. meanwhile, police and residents of Takoradi are on a manhunt for the middle-aged woman believed to have stolen one-year-old Mawusi from his mother

Leonard Quansah a family member says they are trusting the police to do good job, since the CCTV camera of a nearby bank captured the baby as she moved away from the market.

little Francis Mawusi is not the first child to go missing in Takoradi. Three girls from separate families were taken since last year and nothing has been heard about their whereabout.

Newsletter Signup
In this article:
Up Next: 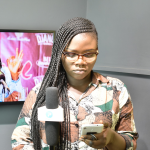